Think outside the bus

Want to tell better stories? Remember The Wheels on the Bus.  My daughter and I sing it often.  We start with the traditional . . .

Then, we start to add our own variations.

She is pretty engaged through all of this (because she’s 3), but her engagement reaches a new level when we loose our creativity and stop being restricted by what could actually be on a bus.

How about the hippopotamus on the bus?

But, a hippopotamus can’t be on a bus.

The airplane on the bus?

The penguins on the bus?

The jell-o monsters (monsters made out of jell-o) on the bus?

I hope you can see the connection.  When we open up the possibilities, my daughter giggles and begins suggesting her own wild ideas.  The same old song has become brand new and much more engaging.  In our classes, we may not be singing silly songs or even telling silly stories with animals and jell-o monsters, but we can apply this same idea.  We can look at our stories and find places where we are being restricted by reality or habit. 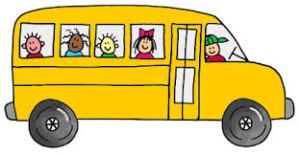 This entry was posted in Reflections, Stories/Storytelling. Bookmark the permalink.

1 Response to Think outside the bus